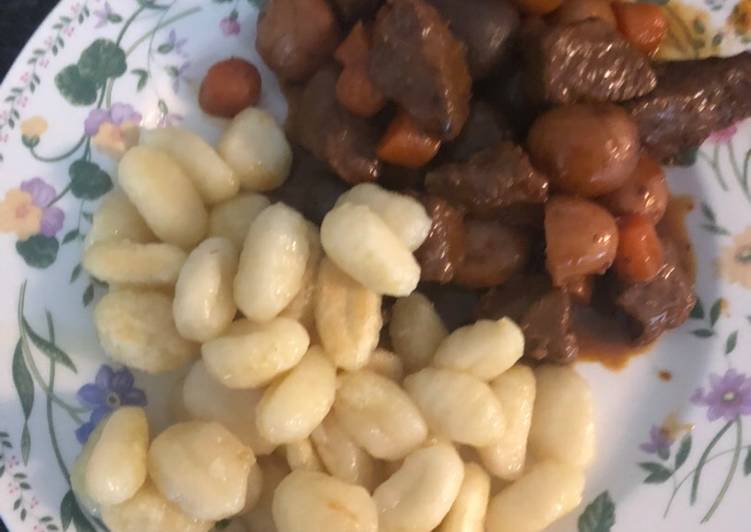 Hungarian beef stew and goulash. Hungarian goulash should be a flexible recipe, and you should taste it and adjust it when it is almost cooked, to suit your own taste. I am Hungarian and I make this dish quite often. However we do not call this goulash, just beef stew.

But in the winter months, the version I'm after is the rich, hearty, rib-sticking Hungarian-American version, made with big chunks of beef, carrots, and potatoes in a stew flavored with onions, garlic, peppers, and plenty of great paprika. In Hungarian goulash the beef chunks are usually fairly small compared to other beef stews. Heat the pork lard (or whatever fat source you're using, though pork fat is traditional) in a large Dutch oven over medium-high heat and cook the onions until they're beginning. You can cook Hungarian beef stew and goulash using 19 ingredients and 5 steps. Here is how you cook it.

Stewing beef - Stewing beef is generally from chuck or round cuts, tougher cuts that become flavorful and tender when cooked in stews. The big difference between a traditional stew and Hungarian stews is that Hungarian stews do not rely on a flour or roux for. Stew beef - Stewing beef, while typically taken from tougher cuts of beef, is great for stews like Hungarian Goulash as it softens and becomes flavorful when cooked for long periods of time. Bell peppers + Carrots - Traditional goulash recipes aren't loaded with vegetables.

This Authentic Hungarian Goulash- is a traditional beef stew cooked with lots of onions, Hungarian paprika, tomatoes and sweet peppers. Hungarian Goulash is one of these awesome recipes that require slow coking, so either stove, crockpot or Instant Pot would work depending on the time you. My Hungarian beef goulash recipe follows the rules of cooking an authentic Hungarian goulash recipe and uses the ingredients that are to be found in a traditional goulash. The result is an incredibly rich, flavorful beef stew, comfort food at its best! Goulash is a traditional Hungarian beef stew, or sometimes soup, flavoured with paprika and caraway seeds.